We have been in Riverside, CA for about 2 weeks now, so I figured that this was a good time to indulge the joys, and the trials, of our trip. After getting our engine squared away with my brother and visiting with my sister and her family we began our journey toward California. It was my original intention to travel the coastal highway 101 all the way down from Washington to California; But, as I had driven the 101 along Washington countless times before I decided to just get a kick start and go down Interstate 5 until we got into Oregon. I drove into the wee hours, ok it was like 10pm, and we rested for the night at a rest stop near Portland, Oregon. The next day we made it into Salem and decided to head over to Highway 101, and I am so happy we did! The Oregon coast is breathtaking!

Seeing the endless expanse of salty ocean water and the bluffs with waves crashing into them like an ancient battle between the ocean and the land was a sight for the soul. 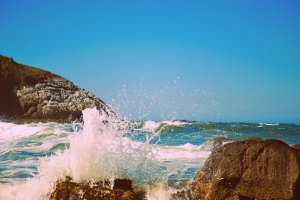 We must have stopped a hundred times just to go run on the beaches and take in the beckoning waves.

We spent most of our nights on the side of the freeway, just staying long enough to get some sleep and eat for energy. I am trying to recall when we actually left on this adventure… It has all seemed to blend into one long day with intervals of sleep. Yes, found it on a gas receipt, we left on September the 11th 2012.

The last big place we stopped in Oregon was the Sea Lion Caves. The second we entered this establishment I had to peel Cardin away from the gift shop to go into the cave! Silly boy wanted to stay and drool over the super shiny pyrite they had for sale (which he ended up using some of his allowance to buy a piece). The price to enter was less than desirable, $17 (with a discount because there was only one sea lion in the cave) but the grounds sure showed that every bit they made went right back in. It was beautiful, and the cave itself was pretty amazing. You take an elevator down, if I remember correctly, 200ft; might be 150ft. You exit the elevator into a section of the cave that has a lookout into a larger part of the cave. The waves collided on a large rock in the middle of the cave where all the Sea Lions lounge about when weather is not sunny and warm as it was that day. So, we had the pleasure of the one Sea Lion upon the rock, like a perch, resembling that she was guarding it for the lazy loungers that lay in the sun outside. The cave was a beautiful sight but nothing compared to the views that were outside. Ocean as for as I could see, bluffs, waves, and a bunch of lazy Sea Lions taking in the heat of the sun. It was well worth the $17 to get in.

After our Sea Lion adventure we made our way toward the Trees of Mystery, and after a few beach pit stops we made it to Paul Bunyan and his blue bull Babe.

I love places like this, one because of the fantastic memories. I will never forget seeing Cardin standing there talking to Paul Bunyan for almost 30 minutes before we actually went into the trail, and then the almost 2 hours as we left (he even ate his lunch on his shoe, as they continued to chat). The second were the trees themselves. I have a deep love and respect for trees. They really put into perspective how small we are, some towering above at almost 300ft; Strong, undying beauty. Trees teach us to be still and that if nurtured you can reach the heavens. Such amazing and beautiful trees, we even got to experience the Sky Trail. We were as high as the trees and could see across the entire mountain; Endless trees and mists of fog. The third reason is the sense of peace I have after leaving a place like the Trees of Mystery; knowledge, peace, and a happy calmness. 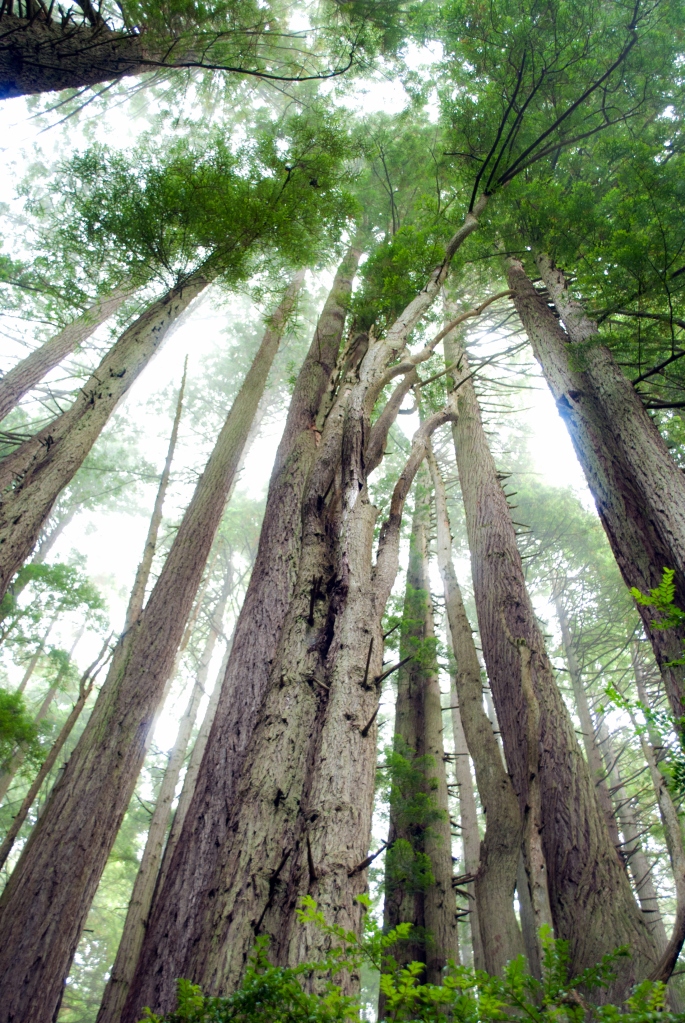 After the joyous time we had at the Trees of Mystery we then made our way down a scenic route that was called Avenue of the Giants. Winding roads of gigantic Redwoods! We stopped a couple times along the way to bask, and gaze up at all of their giant glory; a good description of them, Gentle Giants.

As we made our way through the Redwoods we found a little homemade tourist attraction in someones yard. They had a bunch of wood carvings, a huge shell of a Redwood that you could drive a small car through, and a couple of really cool tree stump houses that they carved. You could go into them and sit with a book if you wanted! They were pretty awesome. There was one place we didn’t get to go into that I was a little bummed about, I can’t even remember the name but there was a huge Tyrannosaurus Rex outside. It was some sort of dinosaur safari, unfortunately they were closed when we made our way by them. 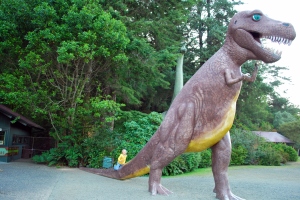 Sadly this was the last “big” attraction we saw because as soon as we made it into the warmer California weather my engine started having troubles. And to make a very long story short we ended up breaking down at a rest stop about 30 miles from Fresno. We spent almost 3 days there. We met an amazing family who helped us more than I could ever repay. He rebuilt a lot of my engine, replaced things, and rescued us more than once. The gas he spent alone in rescuing us was quite a bit. He even set us up in their guest bedroom at their house and we stayed with them for 3 days. Scott, Derek, and Anastasia Black will always be friends in our lives. They are amazing people with amazingly huge hearts. I don’t know what we would have done without them, especially since everyone else we asked helped from turned the other way.
I ended up being able to drive the RV through the night, cooler, without over heating. I drove all through the night and made it to Riverside at 6am on the 19th of September. And I spent about 4 days after that just recouping from our adventurous drive!

I was born in California, spent my childhood in Colorado, grew up in Washington, and found myself on the open road. I now live in Maine with my son, daughter, dog, and cat! <3 xoxo View more posts

Designs to Lift and Inspire

Writing for the Pleasure of it

"Let me live, love and say it well in good sentences." - Sylvia Plath

imagination is the key

this is... The Neighborhood

the Story within the Story

Just a regular thirty-something-year-old trying to capture the essence of life in writing. Join me as I journey through the ups, the downs and the adventures in between.